Madeline H. McWhinney was appointed to the Commission in 1980 by Gov. Brendan T. Byrne as one of the first full-time commissioners.  She joined the Commission after a career in banking and consulting.  Immediately prior to her appointment, she was president of the management consulting firm of Dale, Elliott & Co. in New York.

McWhinney was the first president of the First Women's Bank in New York from 1974 to 1976 and served on the board of the American Stock Exchange.  Prior to that, she had a 30 year career with the Federal Reserve Bank of New York.  In 1960, she became its first female Federal Reserve officer and manager of its newly established market statistics department.  Later, she became the bank’s first female assistant vice president.

McWhinney graduated from Smith College and received a masters degree in Business Administration from New York University.  During her career, she was active in a number of economic and women's organizations, including the American Economic Association and the National Association of Bank Women. 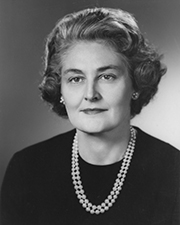