Walter N. “Bud” Read was appointed by Governor Thomas H. Kean in 1982 as the second chairman of the Casino Control Commission.  After confirmation by the State Senate, he was sworn into office on December 2, 1982.  He served two terms as chairman, until 1990.

Prior to joining the commission, Read practiced law and was a senior partner in the firm of Archer, Greiner & Read in Haddonfield.  He served as president of the New Jersey Bar Association and had also served on the Cinnaminson zoning board. 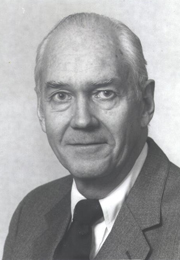