Joseph P. Lordi was appointed by Governor Brendan T. Byrne as the first chairman of the Casino Control Commission.  Lordi was sworn into office on September 6, 1977 and presided over the agency during its formative years.  He led the agency from its inception, through the opening of the first seven casinos and left a lasting imprint on the state’s casino regulatory scheme.  He served until 1981.

Lordi served in the Office of Strategic Services in Europe during World War II then returned to New Jersey and attended Rutgers University School of Law.  After law school, he served as a Deputy Attorney General for several years before joining the Essex County Prosecutor’s Office in 1959 as an assistant prosecutor.  He left in 1964 when he was appointed Director of the state Division of Alcoholic Beverage Control.   He returned four years later, when he was named Essex County Prosecutor.  During his nine years in that position, he ferreted out political corruption in the county and also prosecuted several notorious organized crime figures.

After stepping down from the Commission in 1981, Lordi went into private practice in his brother’s law firm.  Lordi died on October 21, 1983 at the age of 64. 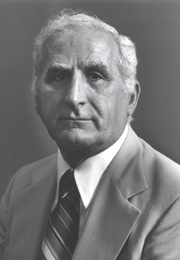