William David Waters became a member of the Commission on October 20, 1986 following his nomination by Governor Thomas H. Kean.

Waters, a resident of Cherry Hill, had retired in December 1985 after 38 years of service with the Internal Revenue Service.  He served in a variety of positions for the IRS and rose to the position of Regional Commissioner for the eastern states with offices in Philadelphia in 1974 – a position he held until his retirement.

Waters was born and raised in Camden, graduated from Camden High School and Temple University where he received his undergraduate degree in accounting and his masters in Business Administration.

He served in the U.S. Army from 1943 to 1946 and was a member of the U.S. Army Reserves.  He was active in the Boy Scouts of America, the South Camden YMCA and in other civic and community organizations. 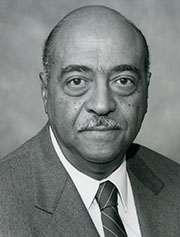