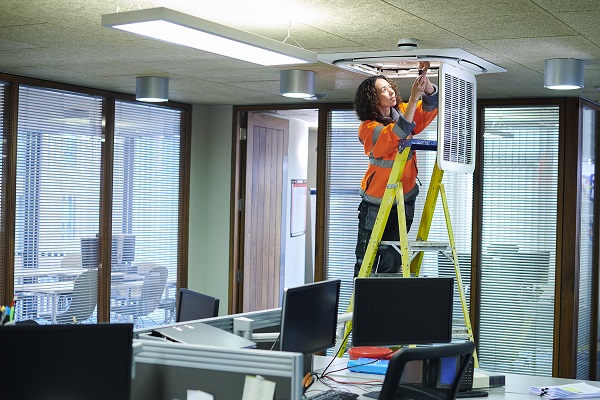 The following are frequently asked questions regarding state building services.

The State Building Service Contracts Act establishes prevailing wage levels for the employees of contractors and subcontractors furnishing building services for any property or premises owned or leased by the State.

The term "building services" is defined within the Act as, "any cleaning or building maintenance work, including but not limited to sweeping, vacuuming, floor cleaning, cleaning of rest rooms, collecting refuse or trash, window cleaning, engineering, securing, patrolling, or other work in connection with the care, securing or maintenance of an existing building, except that "building services" shall not include any maintenance work or other public work for which a contractor is required to pay the "prevailing wage" as defined within the New Jersey Prevailing Wage Act [N.J.S.A. 34:11-56.25, et seq.]."

The State Building Service Contracts Act establishes prevailing wage levels only for building service workers and only when such services are performed under a contract with the State (not municipalities or counties) for the performance of same for a property or premises owned or leased by the State.

The Prevailing Wage Act (N.J.S.A. 34:11-56.25 et seq.) establishes prevailing wage levels for workers engaged in "public works", which is defined under the Prevailing Wage Act to include construction, reconstruction, demolition, alteration, custom fabrication or repair work or maintenance work, including painting and decorating, done under contract and paid for in whole or in part out of the funds of a public body, except work performed under a rehabilitation program.

For the purposes of compliance with the Act, the Department considers the term "engineering" to mean the daily, routine maintenance of the physical plant of a building including, but not limited to, boilers, heating, ventilation, and air-conditioning (HVAC) systems, electrical service, and plumbing. Some of the "engineering" occupations that are covered by the Act are listed in the wage rate determinations and job title descriptions.

Excluded from the definition of "engineering" under the State Building Contracts Act are the following:

The State Building Service Contracts Act requires that the Commissioner of Labor and Workforce Development base his or her prevailing wage for building services designations on the wage determinations made by the General Services Administration, pursuant to the federal "Service Contract Act of 1965" (41 U.S.C. s.351, et seq.) for the appropriate localities and classifications of building service employees. These federal wage determinations are available on the federal Wage Determinations website at beta.SAM.gov.

Instructions for obtaining wage determinations are available here or you may go directly to beta.SAM.gov.

The most common occupations involved in the performance of "building services" include, but are not limited to, the occupations listed below. If you do not see the occupation you are searching for, please check the "Service Contract Directory of Occupations" for the appropriate occupation. The complete Directory is available here (Topics > Government Contracts > McNamara-O'Hara Service Contract Act) and at beta.SAM.gov (Reference Library).

Activities that do not provide services related to the building structure itself, such as snow removal and outside lawn/landscaping maintenance, are excluded.

No, the worker may not be paid the lower of the two rates. Provisions of the State Building Service Contracts Act do not interfere with, impede, or in any way diminish the right of workers to establish and receive wages in excess of any applicable minimum under the Act. If a collective bargaining agreement has established a higher rate, the covered workers must receive the higher rates.

Yes. State wage and hour laws require the overtime rate of one and ½ times the hourly wage rate be paid for work over 40 hours in any workweek. Under the State Building Services Contracts Act, the regular or basic hourly rate of the employee shall not include any fringe benefit payments computed. Additionally, the federal Service Contract Act, upon which the wage and benefit rates are based, makes no distinction between temporary, part-time, and full-time employees. The wage and fringe benefit determinations apply equally to all such service employees engaged in work subject to the Act's provisions. A sample for calculating the payment of wages and the benefit rate when overtime is due follows:

If an employee during a workweek works in multiple classes of work in the performance of the contract and two or more rates of compensation under the federal Service Contract Act are applicable to the separate classes of work, which he or she performs, the employee must be paid the highest of such rates for all hours worked in the workweek unless it appears from the employer's records or other affirmative proof which of such hours were included in the periods spent in each class of work. The rule is the same where such an employee is employed for a portion of the workweek in work not subject to the Act, for which compensation at a lower rate would be proper if the employer by his records or other affirmative proof, segregated the work time thus spent.

Overtime rates paid to an employee, as described above, are paid in accordance with State law. No benefits rate is required on the overtime rate, by State law. The contractor or subcontractor is required to pay overtime to the employee, as described in the question above, using a "weighted averaged method", as shown in the following example. The total gross wage is divided by the total number of hours worked to obtain the average hourly rate. The average hourly rate is then divided in half to determine the additional premium (half-time) rate due the employee.

The employee is still due the additional premium pay (half-time) for the 6 overtime hours. The average hourly rate ($9.22) is divided in half. The half-time rate is $4.61.

No, the State Building Service Contracts Act does not apply to every worker. The State Building Service Contracts Act provides that for occupations to which the new wage standards apply; the Commissioner or Director of the Division of Wage and Hour Compliance may issue a special license authorizing employment at wages less than the wage standard established for building services for a fixed period of time for those whose earning capacity is impaired by age or physical or developmental disability or injury.

Each contractor and subcontractor shall keep an accurate record showing the name, classification, and actual hourly rate of wages, daily and weekly hours worked and any hourly cost of benefits paid to each worker employed by him or her to perform building services pursuant to a State contract or subcontract, and shall preserve those records for two years after the date of payment, for work performed under the contract. The contractor shall also maintain certified payrolls covering the corresponding two-year period. However, general payroll records must be kept for six years. A sample of the payroll certification is form MW-562.

The State Building Service Contracts Act requires that a contract shall provide for "annual adjustments" to the prevailing wage rate during the term of the service contract.

The anniversary date of the contract shall determine the date of any "annual adjustments.”

You can file a Wage Complaint for monies due. You may file a wage complaint online or by mail.

If you file your complaint online, you will be asked if you provided building services for a property owned or leased by the state of New Jersey.

If you choose to file your complaint by mail or fax, send your completed Wage Complaint (form MW-31B) to:

A violator of the Act will be charged with a disorderly persons offense and, upon conviction, could be fined not less than $100 and up to $1,000, or be imprisoned for not less than 10 nor more than 90 days, or be subject to both the fine and imprisonment. The Act also provides that the NJDOL Commissioner can assess a violator with administrative penalties up to a maximum of $250 for a first violation and up to a maximum of $500 for each subsequent violation.

Additionally, for violations of the Act, when the commissioner supervises the payment of amounts of wages due to workers, contractors, or subcontractors will be required to pay the commissioner an administrative fee equal to not less than 10% or more than 25% of any gross unpaid wages.