Sharon Anne Harrington became a Commissioner of the New Jersey Casino Control Commission in July 2009.  She was reappointed in June 2013.

Harrington has served as Vice Chair an unprecedented eight terms.  During her tenure, the industry has been challenged with competition and economic turmoil, and has evolved from gaming-centric into a diversified entertainment destination.

Previously, Harrington served as Chair and Chief Administrator of the New Jersey Motor Vehicle Commission. Under her leadership, services were modernized and streamlined and it was regarded as one of the most successful agencies in the state.  She was Vice Chair of the Region 1 Board of Directors of the American Association of Motor Vehicle Administrators and sat on the International Board.

Harrington has served as State Director for two U.S. Senators. Private sector experience included Managing Partner of Public Strategies Impact, a Government Relations/Public Affairs firm. Under four governors, she served as Chair of the New Jersey State Council on the Arts, working with policy leaders to advance support for the arts and cultural initiatives.  She has served as a Commissioner of the State Ethics Commission, Urban Enterprise Zone Authority, and New Jersey Cemetery Board.

Harrington is a graduate of Glassboro State College, now Rowan University, where she served on the Alumni Board and is currently a member of the President’s Forum. Harrington retired from state service on July 1, 2020. 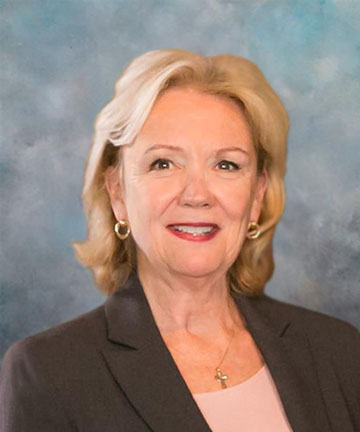