TRENTON – Governor Phil Murphy today signed A764, also known as “Alyssa’s Law”, requiring all New Jersey public schools to install silent panic alarms that will alert law enforcement during emergencies such as an active shooter, or to employ an alternative emergency mechanism approved by the Department of Education. “Alyssa’s Law” will become a state requirement for all public elementary and secondary schools. This law is in memory of Alyssa Alhadeff, a New Jersey native from Woodcliff Lake who was among the 17 people that were killed in the Parkland shooting at Marjory Stoneman Douglas High School last February.

“Alyssa’s death is a stark reminder of the dangers of gun violence and the need for adequate school security measures,” said Governor Murphy. “In New Jersey, we will do everything in our power to prevent these tragedies from occurring within our borders.”

“The trust our children have in us to protect them is a sacred bond that is worth every measure of effort, to whatever length is required. It has unfortunately, wavered these past few years as student increasingly feel unsafe at school. Fortifying our schools’ emergency response capabilities is a small endeavor compared to the value of our children,” said Senator Rice. “New Jersey will be propelled into the forefront of states which are harnessing the power of technology to protect our schools from the type of heart-wrenching tragedies we’ve seen far too many times in the news. But more than that, it will help fulfill our responsibility to the children that we hold so dear.”

“We must do everything in our power to ensure the safety of our children and their teachers. Gun violence is a public health crisis which has effected the security of our communities for far too long,” said Senator Ruiz. “When we drop our children off at school we should be confident that they are safe from harm. This law is a proactive way of making our schools better protected against the threat of violence.”

“Our children deserve the chance to learn in peace,” said Assemblyman Caputo. “It has taken six years to get to this day. I thank the leadership of the Assembly and Senate for posting the bill, as well as, the Governor for creating a pathway for the legislation to become law. Alyssa’s family and community have been steadfast champions of this bill and I commend them for that. Coupled with security measures already in place, this law can increase the chances of diffusing a bad situation without further harm to students and staff.”

"On February 14th, 2018, 17 people were brutally murdered at Marjorie Stoneman Douglas High School in Parkland, Florida including our 14-year-old daughter Alyssa,” said Ilan and Lori Alhadeff, parents of Alyssa Alhadeff. “As former residents of NJ, we are honored that Assemblymen Holley and Caputo, Mayor Carlos Rendo of Woodcliff Lake, Lisa Yakomin, and the NJ voters took action to make schools safe in NJ on behalf of our daughter Alyssa. Our hearts are overwhelmed to know our daughter's death is making national changes for school safety and hopefully other states will follow suit. It is with great pleasure to join Governor Murphy to witness this bill signing and we know that Alyssa is watching from above.” 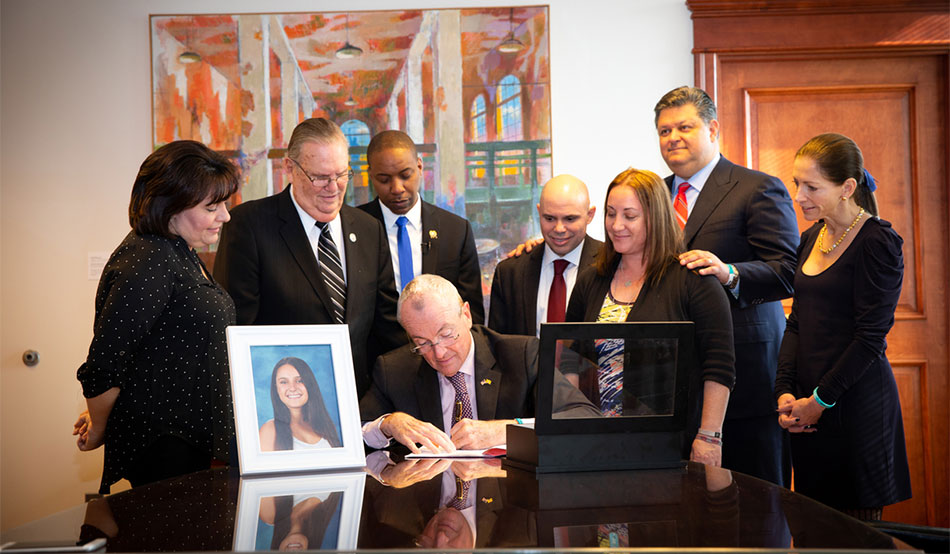