“Every day gun violence is tearing our communities apart, especially in underserved communities of color. Governor Murphy and I are determined to stop the violence through intervention programming,” said Acting Governor Sheila Oliver, who serves as Commissioner of the Department of Community Affairs. “The bills I am signing today will help cut gun violence off at the source through comprehensive hospital-based violence intervention programs (HBIV) that will educate, care for, and protect New Jersey residents to help save lives.”

“We must bring all of our resources to bear on this critical public health issue,” said New Jersey Department of Health Acting Commissioner Judith M. Persichilli. “Hospital-based violence intervention programs have been proven to reduce violence, lower societal costs, and protect and assist victims. The Department of Health welcomes these new tools in the fight to reduce gun violence in our state.”

“As public leaders, we have a moral obligation to do something about the gun violence sweeping this country,” said Attorney General Grewal. “And in New Jersey, we actually are. So I urge our nation’s leaders to take a page from the New Jersey playbook, which treats the epidemic of gun violence like the public health crisis it is and that focuses on prevention, treatment, and enforcement. The time to do so is now.”

“When victims of gunshots arrive to the Emergency Room, the first thing to do is stop the bleeding and dress the wounds,” said Senator Joseph Vitale. “But a band-aid does not address the root causes or the mental trauma resulting from such a violent act. This legislation ensures that hospitals that regularly deal with these kinds of emergencies are also equipped with the tools for secondary treatment – counseling and social services – so as to treat the cycle of violence that these violent acts often produce.”

“There are actions we can take to respond to gun violence and other violent acts to prevent the cycle of violence from continuing,” said Senator Joseph Cryan. “The hospital intervention programs have proven to be successful in reducing the likelihood of retaliation by victims and preventing them from being victimized again. Getting the Crime Victims Compensation office engaged with the hospital trauma centers that treat crime victims will help prevent them from being victimized again and from engaging in retaliation.  The intervention programs that get to victims while they are hospitalized can reach them at a key time with social services, counseling and case management. We want to be resourceful in helping to reduce violence by intervening before it continues.”

“Gun violence is a public health crisis plaguing many communities around the country,” said Senator M. Teresa Ruiz. “The trauma associated with it has a lasting impacted on those directly and indirectly touched by it. Through this legislation we can connect individuals with resources before they are discharged, ensuring that not only their physical health is addressed, but also their mental and emotional well-being.”

“We must continue our due diligence of addressing gun violence in New Jersey, and to do so, we must approach it from every angle,” said Senator Richard Codey. “By providing the injured access to resources such as counseling, we will be able to curb the staggeringly high injury recidivism rates here in the state.”

“In recent months, we’ve seen more acts of mass gun violence in major U.S. cities, Virginia Beach, and our own state capitol that claim too many lives and leave numerous injured,” said Assembly Majority Leader Lou Greenwald. “How do we help prevent these acts from recurring again and again by individuals who believe gun violence or any violence is the answer to a problem? Many who are on the frontlines believe a coordinated effort is the best way to tackle public health problems of mental health and violence. Community and hospital-based prevention services are the key to improving safety in our communities.”

“In Trenton, we understand the impact that gun violence has on a community every day. We see permanent effects of retaliatory behavior and the need to help hospitals close the revolving door of gunshot victims as a result,” said Assemblywoman Verlina Reynolds-Jackson. “Getting to survivors before they leave our hospitals is paramount to decreasing violence happening on our streets. Tying hospital-based prevention programs with community programs is the key.”

“Many are unaware they can receive help and where to go to obtain it,” said Assemblyman Dan Benson. “We need to be there for them at the moment it happens in order to have a long-term effect on their lives. Connecting hospital-based intervention programs and community-based programs will help put an end to the cycle of violence.”

“Even police officers are debriefed after engaging in fire. This goes a long way in making sure they are mentally able to return to the field,” said Assemblyman Gordon Johnson. “Gun violence survivors should have access to this type of mental health care in counseling. Helping one person this way can save many others.”

“Silencing gun violence will require a multi-faceted legislative approach,” said Assemblywoman Carol Murphy. “A part of this is bridging the efforts of hospital-based programs and community programs. With these steps, we continue the fight to make our communities safer.”

“I applaud the Giffords Law Center for developing these measures with the Legislature and am extremely pleased that evidence-based strategies will be expanded in New Jersey,” said Bill Castner, Senior Advisor to the Governor on Gun Safety. "Governor Murphy and Lt. Governor Oliver are working very hard on an issue Washington is complete neglecting – reducing our plague of gun violence.

“Gun violence continues to leave families and communities feeling less safe across the country. It's no different in New Jersey,” said Nico Bocour, State Legislative Director at Giffords. “With these bill signings, Governor Phil Murphy and Lt. Governor Sheila Oliver are taking bold, innovative action in response to the gun violence communities face on a daily basis. We thank Assembly Majority Leader Lou Greenwald and Senior Advisor Bill Castner for leading this lifesaving package of bills forward. New Jersey continues to be a leader on gun safety and these substantial reforms to support evidence-based strategies in the Garden State's most impacted cities will save lives." 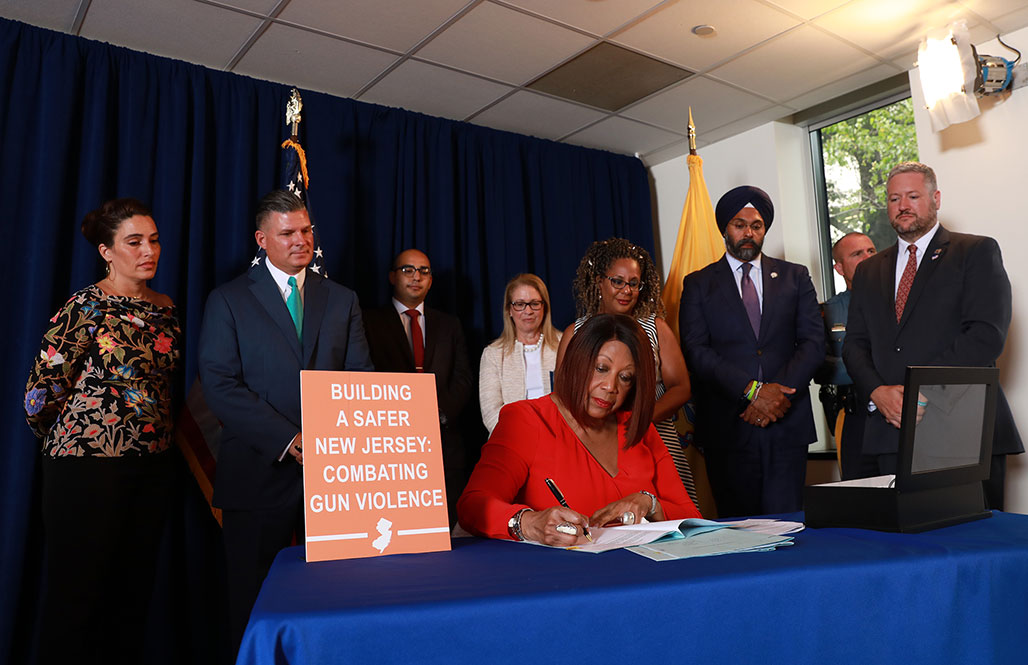