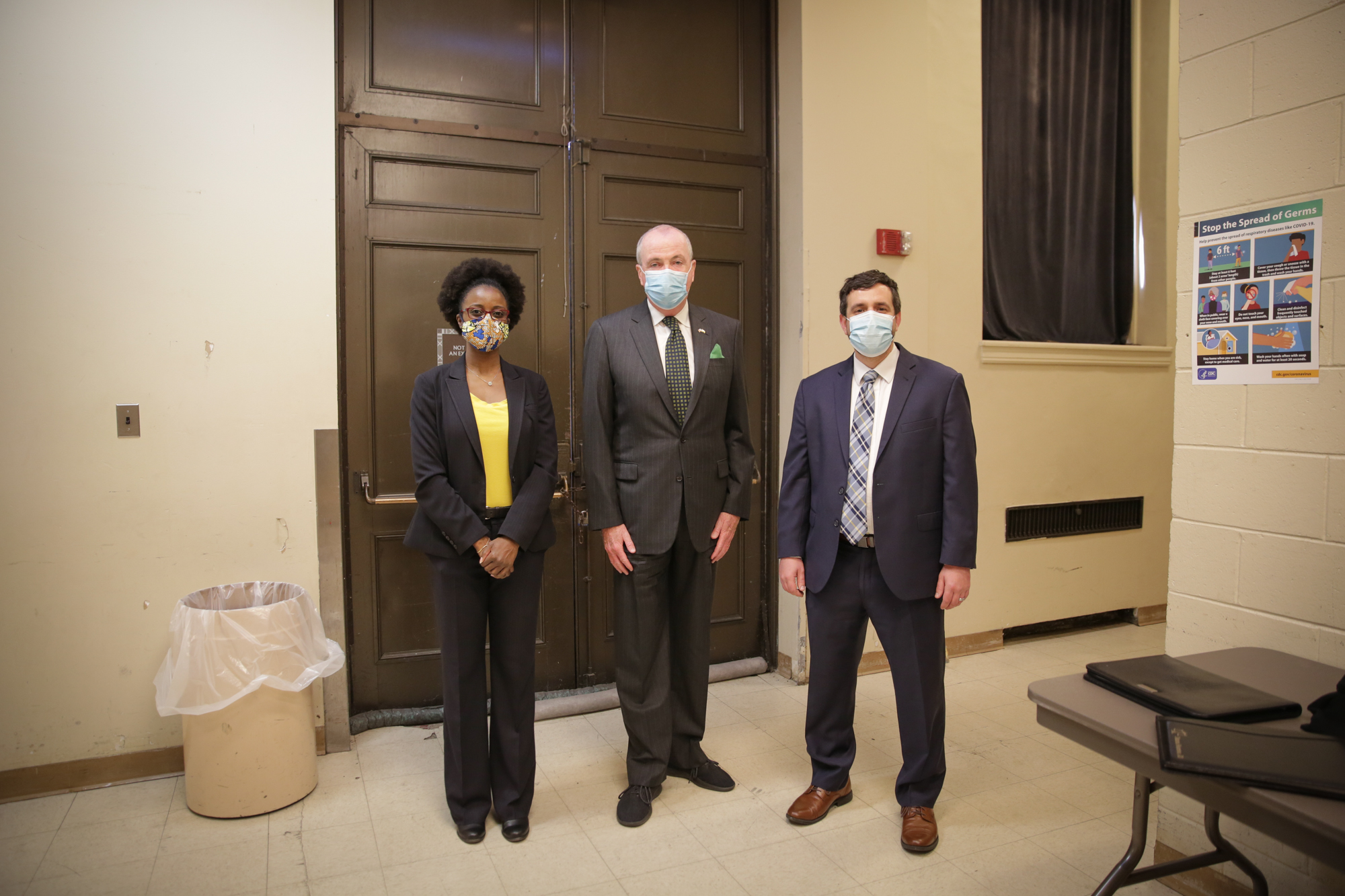 Governor Murphy announced his appointments of Dianna Houenou as Chair of the Cannabis Regulatory Commission, and Jeff Brown will serve as Executive Director of the Commission. The Governor will also appoint Krista Nash as a member of the Commission, upon the recommendation of Senate President Steve Sweeney.

“Dianna has been a critical voice for social justice and equity on my team for the past year and a half after spending several years working on the fight to legalize marijuana with the ACLU,” said Governor Murphy. “Her commitment to doing what is right and to leaving no one behind has powered our criminal justice reform agenda, and I am immensely proud that she will be continuing that commitment as Chair of the Cannabis Regulatory Commission. Since day one, we have said that the legalization of recreational marijuana must prioritize the communities marginalized and decimated by the failed War on Drugs. I know that Dianna is the perfect person to lead our state’s effort to create a marketplace for recreational marijuana that is equitable, fair, and inclusive of all communities.”

“Jeff’s leadership overseeing the state’s Medicinal Marijuana program has contributed greatly to our efforts to expand access to those who need it,” continued Governor Murphy. “He will bring the same integrity, care, and expertise that have led to the success of our Medicinal Marijuana program to his new role as Executive Director of the Cannabis Regulatory Commission, where he will play a key role in establishing our recreational marijuana marketplace.”

“These are excellent appointments who will help ensure the success and integrity of the new cannabis industry in New Jersey," said Senate President Steve Sweeney. "Once we have the commission in place, we can move forward with the legalization process that will deliver social justice reforms and create a new business sector that offers economic opportunities. The commission will have the responsibility of creating the organizational and regulatory system to oversee the safe use of cannabis products by adults. They will play an important role in guiding New Jersey’s leadership role in the reform process.”

“I am incredibly humbled and honored to have been chosen by Governor Murphy for this important position. New Jerseyans have long supported expansions of the medicinal cannabis program and now have raised their voices in support of legalized personal use for adults,” said Dianna Houenou, incoming Chair of the Cannabis Regulatory Commission. “Governor Murphy has been steadfast in his commitment to promoting equity and social justice in the cannabis market, and I am especially grateful for the opportunity to put those values to work as  part of the Cannabis Regulatory Commission. From promoting inclusion in the permit holders to making affirmative investments in the future of our communities of color, New Jersey is poised to mark its position as a leader in advancing racial and social justice. The opportunities for equity that lay ahead are limitless, and I look forward to seizing them for the benefit of New Jersey’s communities that have been disproportionately harmed by failed past policies."

“New Jersey voters have said definitively that they are ready to end cannabis prohibition,” said Jeff Brown, incoming Executive Director of the Cannabis Regulatory Commission. “I am beyond honored to accept this role and to be able play a key role in enacting the will of those voters, and commit to doing so in a way that is safe, equitable, fair, and ensures that our medical cannabis patients always have the access they need.”

"I am humbled and excited to serve on this very important commission," said Krista Nash, an incoming member of the Cannabis Regulatory Commission. "I thank Senate President Sweeney for this opportunity. I look forward to bringing my education and experience as a social worker to the table in order to provide thoughtful input during this process to benefit the residents of New Jersey." 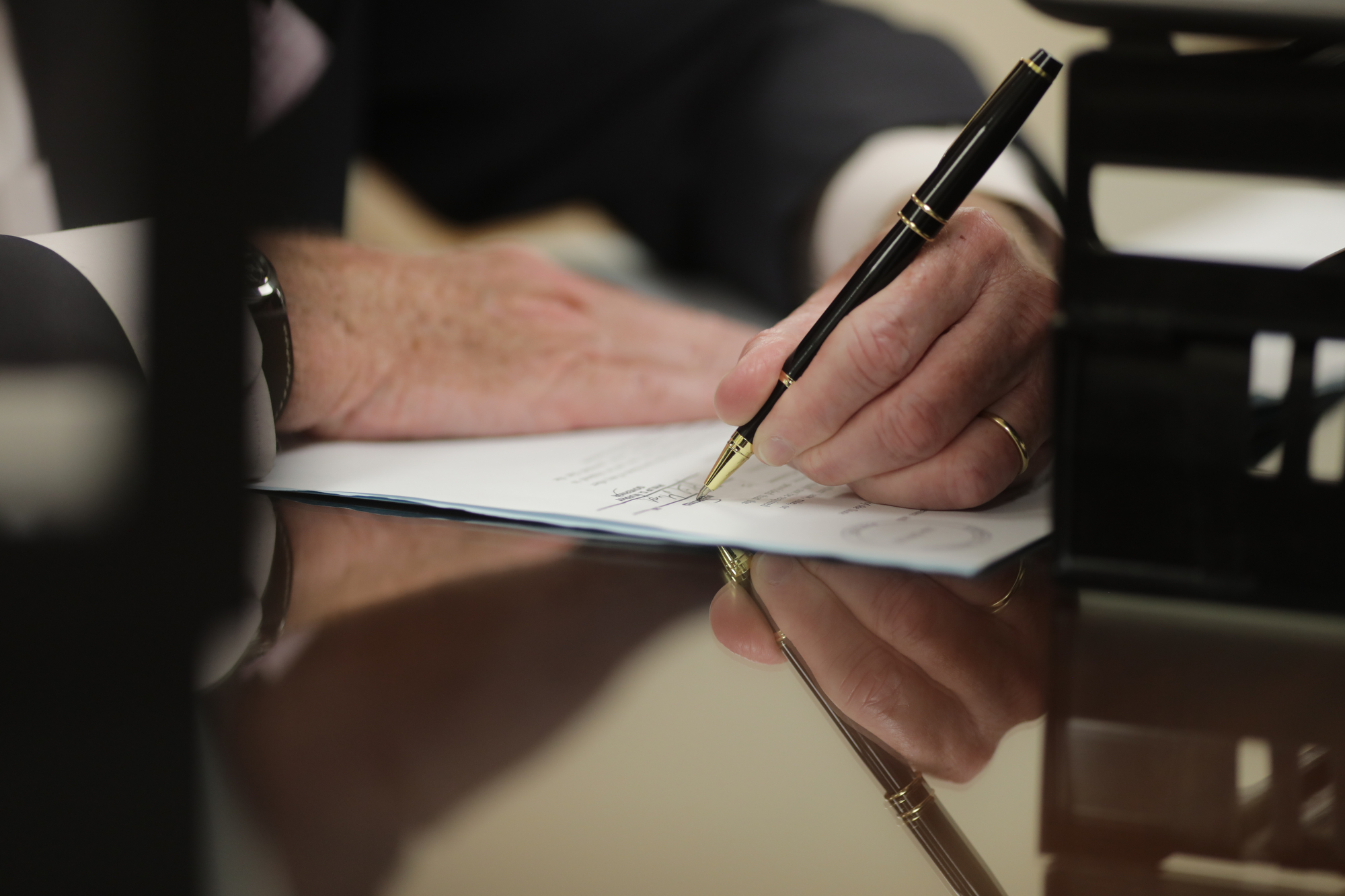 Governor Phil Murphy signed S864, which prohibits the use of single-use plastic and paper bags in all stores and food service businesses statewide. This bill is a significant step to reduce harm and pollution that these products cause to our environment.

“Plastic bags are one of the most problematic forms of garbage, leading to millions of discarded bags that stream annually into our landfills, rivers, and oceans,” said Governor Murphy. “With today’s historic bill signing, we are addressing the problem of plastic pollution head-on with solutions that will help mitigate climate change and strengthen our environment for future generations.”

“From our cities to our shores, single-use plastic bags unnecessarily litter New Jersey’s most treasured spaces and pollute our ecosystems,” said New Jersey Department of Environmental Protection Commissioner Catherine R. McCabe. “By banning single-use plastic bags, Governor Murphy and our legislature continue to make a New Jersey a national leader in environmental protection and the DEP stands ready to implement these new measures and educate the public.”

“Environmental activists and supporters of this bill have been waiting years for this moment. Plastic pollution has caused untold damage to the environment and to our public health,” said Senator Bob Smith, chair of the Senate Environment and Energy Committee. “Taking action to fight plastic pollution now is key to moving towards a plastic-free future. I want to thank the Governor for being a strong partner on this legislation.”

“If you go to the shore, you see plastic buried in the sand and floating in the ocean. There are an estimated 150 million metric tons of plastics currently in our oceans and about eight million metric tons are added each year,” said Senator Linda Greenstein, vice-chair of the Senate Environment and Energy Committee. “We have heard from countless activists and residents around the state, and they have made it clear that they are sick of plastics polluting our ecosystem. Now that this bill is signed by the Governor, New Jersey is closer than ever to a cleaner, greener future.” 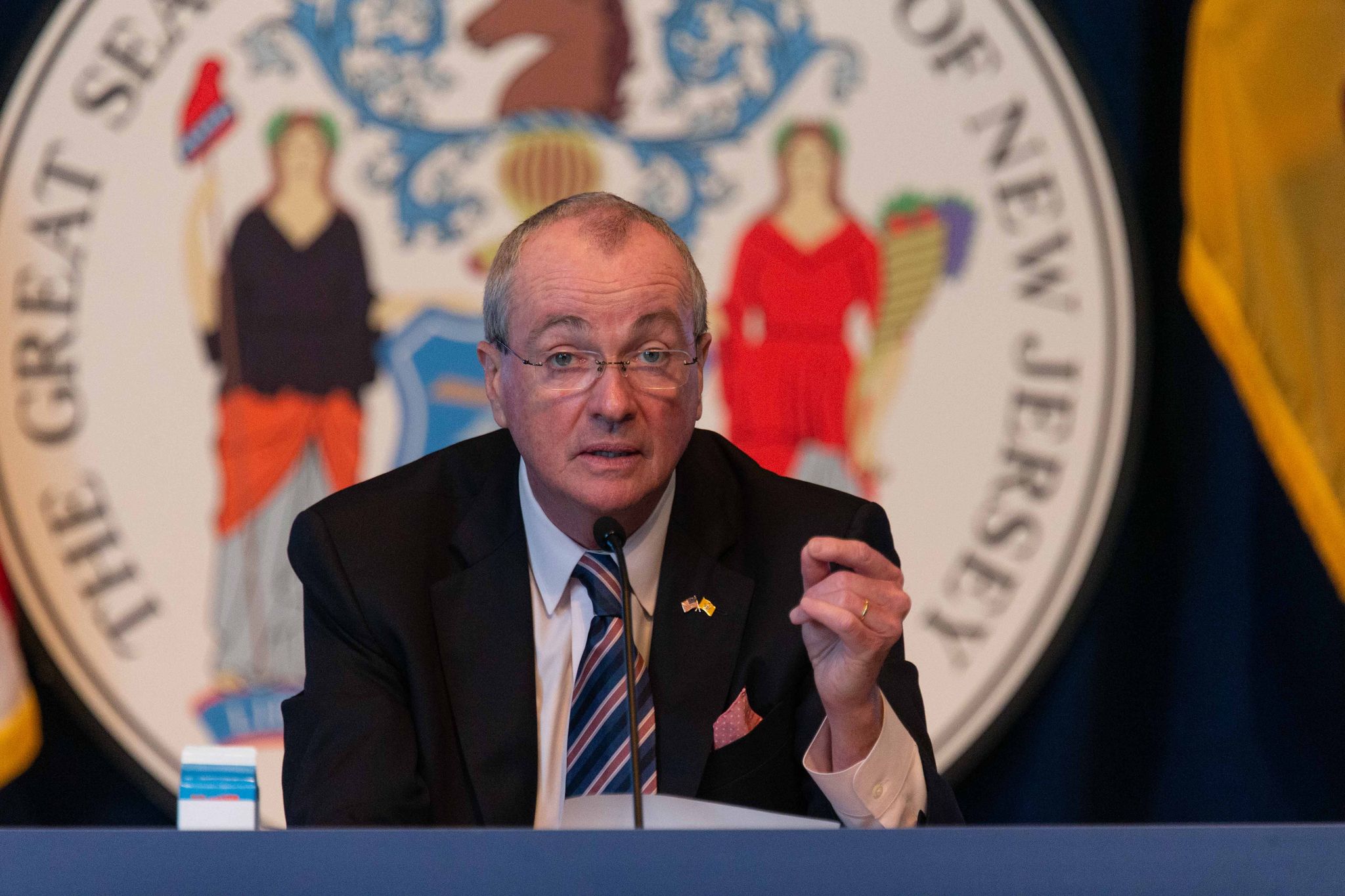 Governor Phil Murphy delivered to the Legislature a list of proposed projects for the first round of funding from the Library Construction Bond Act (LCBA). The Library Construction Bond Act authorized $125 million in state bonds to fund critical improvements to New Jersey public libraries. The bond issuance was approved by New Jersey voters in November 2017 and all applicants were required to identify a 50 percent match to fund their proposed projects.

38 highly-rated projects from 16 counties across the state were recommended to the Legislature to receive funding from the Act. Currently, $87.5 million is available to be distributed among these projects during this initial round. More than 129 applications were reviewed by a committee comprised of experts from across relevant State agencies, including the New Jersey Economic Development Authority, the New Jersey Department of Environmental Protection, the Department of Community Affairs, the New Jersey Treasury, and the New Jersey Historical Commission, among others.

“From major building renovations to vital technology upgrades, this bond program will transform our libraries to better serve and be more accessible to their local communities,” said Governor Murphy. “I want to thank the State Librarian and President Hancock at Thomas Edison State University, as well as our partner agencies, on their collaborative work toward this effort.”

“New Jersey libraries continue to respond to the needs of our communities and are working tirelessly to bridge the digital divide and keep residents connected to many critical services which have become all the more essential in recent months,” said Mary Chute, New Jersey State Librarian. “We are eager to see local libraries break ground on these much-needed projects, which will make library facilities safer, more efficient, and more accessible for all people.” 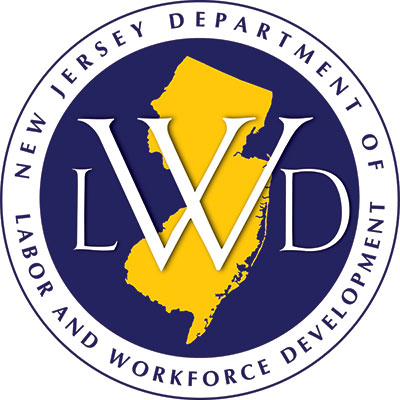 The New Jersey Department of Labor and Workforce Development, which has distributed $1.2 billion in FEMA payments to 778,000 New Jerseyans, announced this week that an additional 88,000 potentially eligible claimants would get an additional opportunity to certify for the $300 limited-time benefit.

The Labor Department will notify people who meet the eligibility requirements via email and text message in coming weeks of this additional chance to attest that their unemployment during the eligible weeks was COVID-19 related, which is required by federal law for this benefit. There is no need to call or email the Department.

“Since the payments made to New Jerseyans to date did not exhaust our FEMA Lost Wage Assistance, we are developing a process for remaining claimants who may be eligible but did not select a COVID-related reason for their unemployment to do so,” said Labor Commissioner Robert Asaro-Angelo. “We’re pleased to be able to offer this opportunity to people who missed the original certification deadline, in hopes that many will meet the federal requirements for eligibility.” 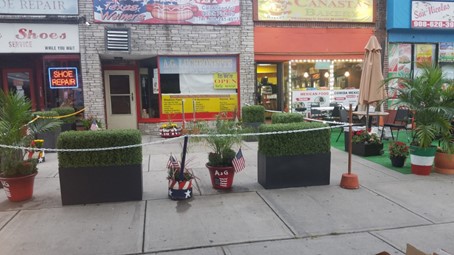 The New Jersey Department of Community Affairs (DCA) is highlighting a project to create and beautify outdoor seating in front of restaurants along Chestnut Street in Roselle Borough’s downtown business district. Through the initiative, which was made possible with grant funding awarded to the Borough in 2019 by DCA’s Neighborhood Preservation Program, green planters of different sizes and varieties now decorate Chestnut Street’s wide sidewalks to provide people with designated spaces to safely and enjoyably eat outside.

The planters are part of a long-term plan to energize Chestnut Street’s 24-foot-wide sidewalks to create a sense of place that attracts residents and visitors to the business district. With the onset of the COVID-19 pandemic and the subsequent economic recession in spring 2020, the local Neighborhood Preservation Program (NPP) team in Roselle revised its five-year NPP implementation plan to focus even more attention on giving customers safe, attractive outdoor dining spaces in order to support local restaurants.

“Roselle Borough saw a need in the community and acted quickly, decisively, and creatively to address it. This is local government at its best and DCA is proud to have been in a position to help,” said Lt. Governor Sheila Oliver, who serves as DCA Commissioner. “The Murphy Administration decided to reinvest in programs such as NPP for this very reason – to give local governments the resources they need to positively impact the communities they serve whether in times of well-being or times of crisis.”