“Today’s groundbreaking demonstrates the Christie Administration’s commitment to quickly rebuild all types of housing lost to Sandy so that all New Jersey residents can find affordable homes that meet their needs,” said New Jersey Department of Community Affairs Commissioner Richard E. Constable, III, who chairs the HMFA Board and whose Department is administering the distribution of CDBG Disaster Recovery funds for the State. “The Somerset Mews Apartments groundbreaking comes less than five months after New Jersey’s CDBG Disaster Recovery Action Plan was approved and is just the beginning of what will be dozens of groundbreakings in the weeks and months ahead.”

Somerset Mews Apartments, which will be located in a state-designated transit village area of New Brunswick, will consist of 375,000 square feet of new construction, including nearly 9,000 square feet of commercial space, and 238 residential apartment units of which 20 percent will be affordable to families making less than 50 percent of Middlesex Area Median Income (approximately $52,500 for a four-person family). The project will be adjacent to the New Brunswick Train Station and near the Easton Avenue corridor campuses of Rutgers University, Robert Wood Johnson University Hospital, and the Cancer Institute of New Jersey. The apartments will feature amenities such as hardwood floors, granite countertops, porcelain tile floors, wood cabinetry, and a stainless steel appliance package, and the building itself will have an eco-roof.

With a total development cost of $82.8 million, Somerset Mews Apartments is currently the largest mixed-income redevelopment in the State of New Jersey, financed by HMFA, NJEDA, and Citibank. The $4.8 million that Somerset Mews received in CDBG Disaster Recovery funds through the HMFA-administered Fund for Restoration of Multifamily (FRM) Housing made the project possible. The FRM fund provides for-profit and non-profit housing developers an opportunity to secure zero- and low-interest loans to finance the development of affordable housing through new construction, conversion of vacant commercial/industrial buildings, or rehabilitation of uninhabitable dwellings, primarily in those counties impacted by Superstorm Sandy.

“If not for this recovery program, Somerset Mews would not have been able to break ground so soon after Sandy,” said HMFA Executive Director Marchetta. “This program incentivizes developers to produce mixed-income buildings, providing needed housing opportunities for the full spectrum of New Jersey’s citizens including working households struggling to make ends meet and families significantly impacted by Sandy.”

Project developer Boraie Development, LLC, which is based in New Brunswick, has worked successfully in the past to construct and sell Spring Street Plaza, a 120-unit condominium project that provided affordable housing opportunities to New Jersey residents.

The project’s $82.8 million total development cost will not only provide affordable housing opportunities for New Jersey families, but it will also have a positive impact on the greater New Brunswick community. The HMFA estimates that the project will produce approximately 786 full-time equivalent jobs, $38 million in compensation, and $131 million in economic spending during the initial construction period, according to economic and fiscal impact analysis ratios developed by HR&A Advisors, Inc., a national real estate and economic development consulting firm. Following the same analysis, the project will have an estimated ongoing impact of $14.7 million in economic output, which would support approximately 83 full-time equivalent jobs and $4.4 million in employee compensation, and will generate approximately $4.5 million in one-time state and local tax revenue and an ongoing fiscal impact of $770,000 in State and local tax revenue.

For more information about the Fund for Restoration of Multifamily Housing, go to http://www.state.nj.us/dca/hmfa/developers/cdbg/ on the HMFA website. 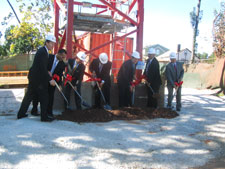