Once completed, the four-story building will include 6,000 square feet of first-floor retail for six stores. All the apartments will be for low- to moderate-income residents earning up to 60 percent of the area median income. Ten units will be set aside for residents with mental health needs. The apartments will be close to a major city thoroughfare – Route 21/McCarter Highway – and public transportation, a school and nearby shopping. Construction is expected to be completed in December.

The development is located on the former site of the Boys & Girls Club at 416-426 Broadway in the city’s North Ward, and is named after former City Councilman Anthony Carrino, who represented the North Ward for 28 years.

“Carrino Plaza will enhance the ongoing revitalization of Newark, while providing much needed affordable homes for families who are working in and around Newark and contributing to the city’s dynamism,” said Lt. Governor Sheila Y. Oliver, commissioner of the New Jersey Department of Community Affairs (DCA) and chairwoman of the NJHMFA board. “Importantly, this development also continues our collective efforts to provide supportive housing for people with special needs.”

Aside from Carrino Plaza, NJHMFA has committed new financing for more than 1,500 housing units in other developments throughout Newark this year alone.

The project will include one-, two-, and three-bedroom apartments, with rents ranging from $947 to $1,298, as well as a community room, laundry facilities and an onsite manager’s office.

NJHMFA provided $10.5 million in construction-only financing for the development from its Conduit Bond program, as well as $1 million from its Sandy Special Needs Housing Fund. The fund was created in the aftermath of Superstorm Sandy to provide low-interest loans to developers to build permanent, supportive housing for people with mental, physical and developmental disabilities. NJHMFA also awarded the development 4% Low Income Housing Tax Credits, which are expected to generate approximately $7.8 million in private equity.

“Building rental housing that is affordable to working families enables them to stay and grow in the community, and have ready access to downtown amenities, jobs and public transportation,” said Executive Director Richman. “Mixed-use developments, such as Carrino Plaza, help anchor and enhance walkable communities by providing jobs, shopping and other activities that help stimulate the local economy.”

“The Carrino Plaza Apartments are among a long list of transformative projects advancing in Newark with support from the ERG program,” said Paul Ceppi, director of Business Banking and Community Development at the New Jersey Economic Development Authority. “The investment associated with these projects is significantly impacting not only affordable housing, but is also returning many long-vacant properties to productive use.”

“This administration has made affordable housing a central pillar of its efforts to make Newark a stronger and more prosperous city for all of our residents,” Newark Mayor Ras Baraka said. “Our groundbreaking Affordable Housing Ordinance requires developers to set aside units as affordable housing, and developers are responding favorably to our legislation, seeing the moral and human value in creating such housing. We are proud that Regan Development Corporation has signed on in full, with the Carrino Plaza Apartments, which will not only provide affordable housing, but 10 units for residents with mental health needs. This is an example to our nation on how to build housing with humanity.”

The Mental Health Association of Essex County will provide supportive services for the development’s special needs residents, including case management, supportive counseling, money management/payee services, nursing services, nutritional counseling, living skills assistance and training, and other services. The services will be funded through a variety of sources including the New Jersey Department of Human Services, Division of Mental Health and Addiction (DMHAS), and the Mental Health Association of Essex County.

DMHAS and the Mental Health Association of Essex County will each provide five monthly rent vouchers to support the 10 one-bedroom units set aside for residents with mental health needs.

Regan Development, based in Ardsley, N.Y., is a family-run business that has developed residential and commercial real estate, and affordable housing developments. 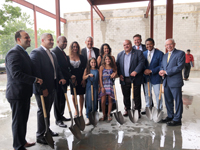